Phonics is a method of teaching children to read by linking sounds (phonemes) and the symbols that represent them (graphemes, or letter groups). Phonics is the learning-to-read method used in primary schools in the UK today.

A phoneme is the smallest unit of sound such as the ‘oo’ in boot or the ‘er’ in writer. The phonemes in the English language are: 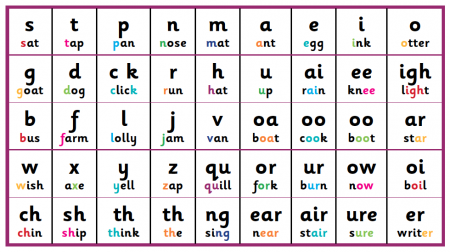 Children are taught letter sounds in primary school, beginning in reception. The aim is for children to be able to see a letter and then say the sound it represents out loud.

It is common for teachers to begin by getting the children to learn the letters s, a, t, n, i, p first as these can then be arranged into a variety of different words (for example: sat, tip, pin, nip, tan, tin, sip, etc).

This teaches children to go from saying the individual sounds of each letter, to being able to blend sounds and say whole words. Different children will learn to do this at different speeds and it can be tricky at first.

While children are learning to say the sounds of letters out loud, they will also begin to learn to write these letters. They will be taught where they need to start with each letter and how the letters need to be formed in relation to each other. Letters (or groups of letters) that represent phonemes are called graphemes.

Children will focus on reading three-letter words arranged consonant, vowel, consonant for some time so that they can get used to other letter sounds such as the consonants g, b, d, h and the remaining vowels e, o, u.

As your child progresses, they will be introduced to more complex sounds and spellings, before moving on to spelling rules such as suffixes and harder concepts such as silent letters.

Whilst it is important to remember that all children will progress at a different level, there are plenty of online resources for teachers, children and parents available online to help children learn phonics.